When He Saw The Bill From The Vet, He Threw His Dog On The Ground And Stomped On Him : AWM

When He Saw The Bill From The Vet, He Threw His Dog On The Ground And Stomped On Him 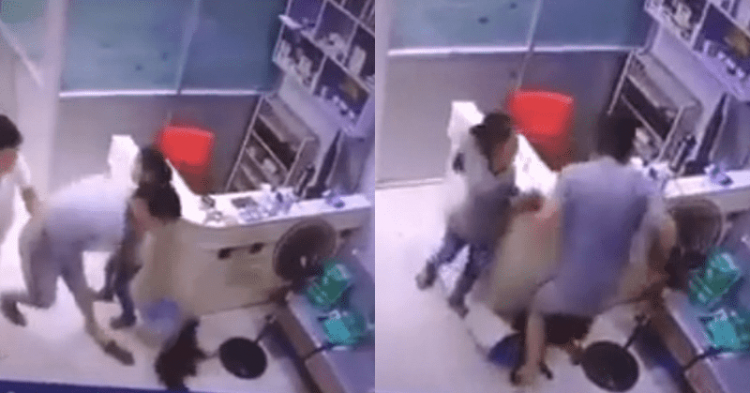 Owning a pet is expensive. Besides having to do all the routine work – like buying them pet food and making sure they get their regular checkups and vaccines – if something goes wrong, you’re stuck with a high vet fee. One man became so outraged with the high bill for the vet’s office that he threw his dog to the ground and stomped on it twice in an attempt to injure the dog.

Fortunately, a little girl, who has a bigger heart than the man, pushed the guy away from the dog, stopping him from his act of violence against the animal. It is not known whether she was the man’s daughter or not.

The video footage was filmed in China and showed the man under stress following the visit to the vet. The incident occurred at an animal hospital in Fuyang, Anhui, China, and the footage has been met with outrage from around the world.

Because the dog is visibly sick and looks weak, the man’s actions against it are even crueler than if the dog was well. The man snatches the black dog from the vet and hurls the sickly animal to the ground. He slams the animal against the ground with such force that it falls limp. Because the angry man is not done committing his act of heinous violence, he proceeds to stomp the animal on the side of the head and then attack its body.

Although the result is not yet confirmed, it appears that the man killed the dog. Instead of being willing to pay the price to put the dog to sleep, the man aggressively attacked it to death so he wouldn’t have to pay the animal hospital bill that offended him as much as it did.

Although the man got two strong stomps in on the dog, he wanted to attack it more. However, the little girl refused to abide such violent and hateful behavior. Although it “wasn’t her place,” she stepped forward and put her safety in jeopardy to stop the man from hurting the dog further. However, her heroism might have come too late as it is likely the man killed the dog from his violent assault on it.

Meanwhile, the vet, whose entire career is based on caring for animals, has come under criticism for not doing anything to protect the little canine. He should have stopped the man from hurting the dog. Instead, he let a small girl do the work for him.

The video footage has sparked outrage the world over. No one likes to see a dog get hurt for no good reason. The man went too far when he assaulted the animal and beat the poor sickly dog that was hurt during the incident with the animal hospital.

Hopefully, this video footage made its way to the proper authorities in China, so this animal abuser could face justice for what he did to the sickly animal. That girl was a true hero for standing up to the attacker like that. The vet should have done better.

What do you think about this incident?