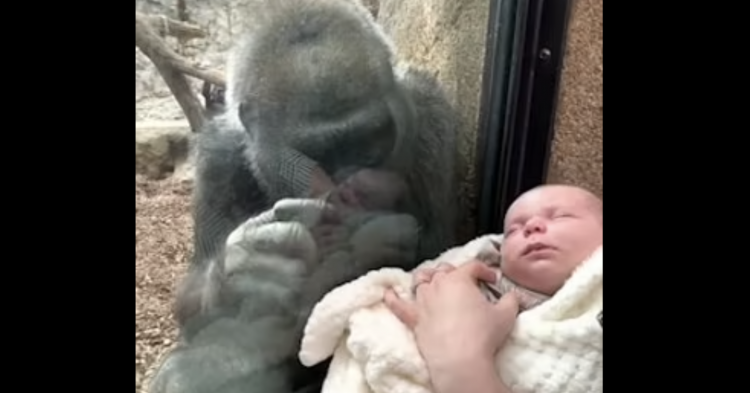 Mom and her newborn baby took a trip to the Franklin Park Zoo in Massachusetts. Mom, Emmily Austin of Jefferson, Maine, was with her little five-week-old baby boy when she cozied up to the gorilla exhibit. That’s when Emmily’s husband managed to capture astounding footage of Kiki the gorilla getting a closer look at baby Canyon. The gorilla, who is also a mother, showed a lot of interest in the human baby, even coming right up to the edge of the enclosure to get a very close look.

In the video, Kiki approaches the glass to take a closer look at baby Canyon, who is asleep throughout the entire encounter. People gasp and exclaim, “Oh my God,” as they notice the gorilla getting closer to the baby boy. Kiki even taps on the window and points toward the baby. She tries to hold the baby’s hand and cannot stop staring at the infant. 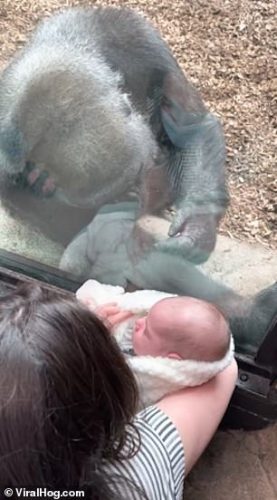 After the initial shock wore off, Austin realized that Kiki was with her baby, too. Four minutes into the short clip, Kiki holds up her baby, Pablo, to show Austin and the other zoo visitors.

“She kept looking around the corner of the cave, and I was like, ‘She’s looking at Canyon,'” Austin told News Center, Maine. “For well over five minutes, she just sat there watching [Canyon], just staring at him, just so lovingly. When I walked into the zoo that day, I never could’ve imagined that we would have had that experience. It was so beautiful, and we walked out just over the moon.” 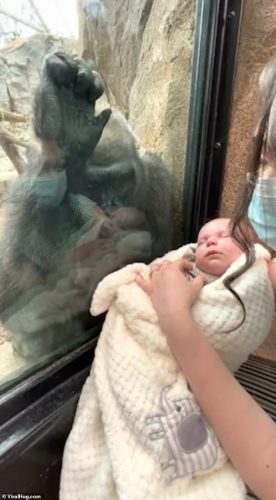 At first, Michael, Austin’s husband, didn’t believe his wife when she told him that the mama gorilla was interested in baby Canyon. He thought she just imagined the gorilla’s interest. However, he eventually listened to her and started filming the encounter, which was later shared on social media, where it went viral.

“The next time she made eye contact with Kiki, she held up Canyon again and waved her over, then Kiki grabbed Pablo and put him on her leg to carry him over to us,” Michael Austin said.

He added, “My wife sat on the floor, and Kiki came over and immediately started interacting with us. It was one of the most amazing experiences to see her trying to hold Canyon’s hand, lick him through the glass, and she just kept on pointing to us and then down at him, almost as if she was telling us, ‘That’s your baby.'” 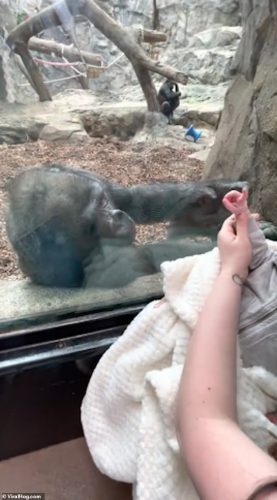 But the interaction didn’t stop there. Kiki then tried to communicate with the Austins through gestures.

“She was talking to us with her hands. Pablo even pushed his face up to the glass at one point, and they watched him, noses touching, together. My wife and I both had tears in our eyes, and we had several people tell us they had never witnessed something or experienced something so beautiful as this in their life. Such an incredible memory to share with our son someday!”

What do you think about this inspiring encounter with a mother gorilla?