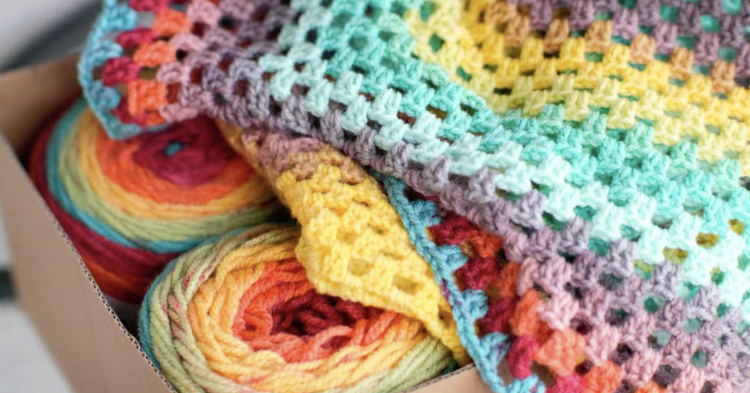 With a baby on the way, one mom wanted to spend her time creating something she could give to her child upon birth. Because she was already able to crochet, mom decided to create a blanket for her little baby. However, mom chose to create a rainbow blanket and wrote about her decision on a forum on Reddit, where she was promptly inundated with negative responses and accusations that her rainbow blanket was disrespectful.

“I also have an almost-three-year-old son, who I’ve been trying to involve as much as I can, so he’s somewhat prepared for his baby sister,” the expectant mother explained on Reddit. “I decided to let him pick out a color yarn for one of the blankets, and he picked a literal rainbow-colored, vibrant, variegated yarn. He loves colors and bright things, most baby blankets are done with soft, muted colors, so I had no problem with one blanket in this color. I started working on the blanket a few days ago and have made some decent progress. My son loves to see it and mentions the ‘rainbow for baby sister’ every time he does.”

Mom doesn’t sell her services, but her friends were able to commission her to crochet blankets for them.

“I had a friend ask me what I was currently working on and if I’d be able to make her a blanket for her sister’s upcoming baby,” the mom wrote. “I sent her a picture of the rainbow blanket I’m currently doing, and she asked who it was for. I told her it was for my baby, and she asked whether I’d had a secret miscarriage before this baby. When I told her no, she went off on me, saying it was very disrespectful to make myself a rainbow blanket when I hadn’t suffered a miscarriage, and therefore I wasn’t having a rainbow baby.”

The thought that she shouldn’t create the rainbow blanket because she didn’t have a miscarriage never crossed her mind.

“This really surprised me as the thought hadn’t even crossed my mind, I have no intention of posting anything about this blanket anywhere or mentioning anything about it, but I can see where someone may think this baby is a rainbow baby if we use the blanket in public. AITA for making a blanket that could disrespect someone who has suffered through pregnancy losses? I can see her point, but I was really just trying to involve my son.”

Most Redditors agreed that the rainbow blanket was not offensive.

“I’ve had seven miscarriages, and I’ve never heard of this… Rainbows are a broad symbol, and they aren’t owned by any particular group,” stated one reader. “If you like rainbows, make a rainbow blanket.”

“You’re crocheting your baby a blanket out of colors your son picked, and you like. Period” wrote another user. “The colors do not have to mean anything, and it’s silly for people to be upset with you if they choose to misinterpret this.”

What do you think about the rainbow blanket?