Heartless Girl Films Herself Putting Her Dog In The Dryer And Turning It On : AWM 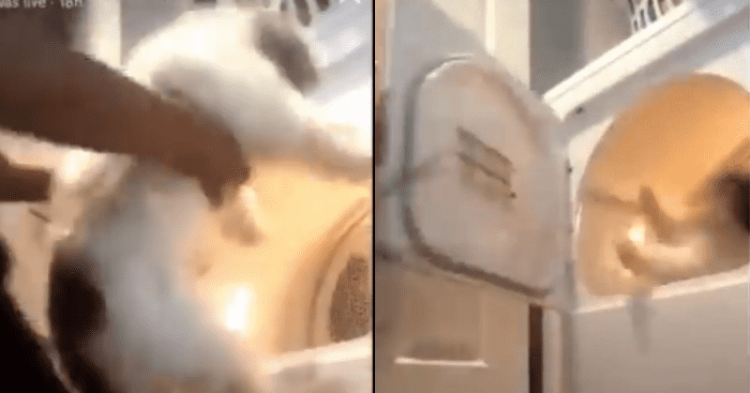 A young girl really, really wanted to get some internet friends. She didn’t know what to do to become “liked” on social media, so she decided to “just go for it.” The schoolgirl decided to use the family pet as a prop to gain social media notoriety and fame – and it worked. However, the way the girl went about using the dog to gain some social media publicity was the absolute worst way to use a dog in a video.

The girl, who has been described as “heartless,” put the family pet into the dryer and turned the machine on so she could get more views on Instagram. The young girl exhibited her sociopathic tendencies shared the incident on Instagram Live but deleted her account once she realized that she had done something that people did not like at all.

Because the dog was trapped in the dryer for seconds, it suffered an agonizing ordeal just so the young girl could feel cool online. More so now than ever before, young people – and some adults – are using social media in desperate ways to get attention. All summer people have been licking ice cream and putting it back into the freezer at grocery stores to gain follows on social media. Teens and children in Spain are taking dumps in public pools and waterparks so they can get “liked” on social media. The lengths that people are going to are absolutely horrendous. And now this girl thought it was a good idea to lock the poor family pet into the dryer so she could get a few extra views on Instagram Live.

In the video, the little girl speaks as if she puts the dog in the dryer all the time – or at least once before. You can hear her saying, “I’m going to do it. I’m going to put his a** back in the dryer. He likes that s**t.”

Then she follows through with her threat and tosses the dog into the dryer and starts up the machine to make him suffer.

When the dryer starts spinning, the girl cheers and screams in delight. She is enthralled with the abuse she is committing to the dog. It’s the best thing she’s done in recent memory – and it’s utterly sociopathic.

“This makes me sick that they’re allowing her to keep the dog. It’s so blatantly obvious how aggressive she is with the doggo, and she literally spits in his face.”

Oh yeah? Did we mention that? The girl spits in the dog’s face before throwing him in the dryer. Disturbing.

When she takes the dog out of the dryer, she laughs in its face as she spits out the words, “I’m sorry.” As the Shih Tzu gets on its feet, it wanders into the hall and looks very disoriented.

What do you think should become of this animal abuser?