After Mom Dies, Her Children Write Obituary Saying The ‘World Is A Better Place Without Her’

Back on March 31, 2018, Kathleen Dehmlow died at the age of 80. When her obituary was published in Minnesota’s Redwood Falls Gazette, it was a bit different than what most people expected. It was actually quite controversial – and revealed the real person Dehmlow had been while on this planet. Instead of pretending she was a nice woman, her children made it clear that she was a mother who “abandoned” her little ones for selfish, personal gain. 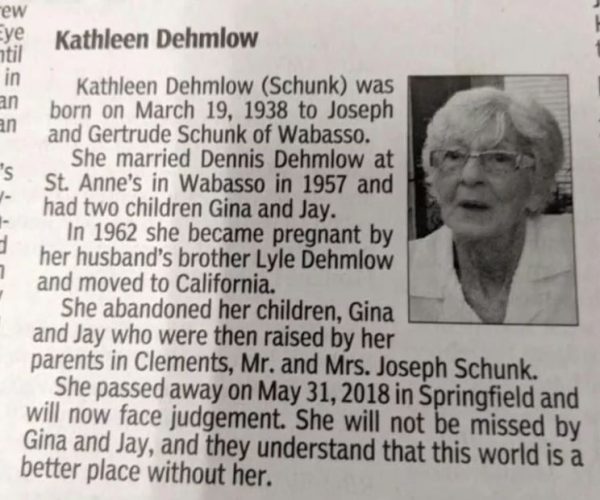 “Kathleen Dehmlow (Schunk) was born on March 19, 1938, to Joseph and Gertrude Schunk of Wabasso. She married Dennis Dehmlow at St. Anne’s in Wabasso in 1957 and had two children Gina and Jay.”

While that may sound normal, what comes next will shock you!

“In 1962, she became pregnant by her husband’s brother Lyle Dehmlow and moved to California. She abandoned her children, Gina, and Jay, who was then raised by her parents in Clements, Mr. and Mrs. Joseph Schunk.”

The obituary concludes: “She passed away on May 31, 2018, in Springfield and will now face judgment. She will not be missed by Gina and Jay, and they understand that this world is a better place without her.”

Although Gina and Jay may seem to have gotten the last word, other relatives have stepped up to try to clarify a few things. One of them is Dwight Dehmlow, a relative. He spoke to The Minneapolis Star Tribune, claiming “there is a lot of stuff missing.” But he admits that the obituary was factual.

Dwight believes Jay wrote the obituary, saying “he decided to go out with hate.”

“She made a mistake 60 years ago, but who hasn’t?” Dwight Dehmlow told the Star Tribune. “Has she regretted it over the years? Yes.”

Eventually, Jay Dehmalo, 58, and 60-year-old sister Gina spoke up, saying no one will understand the pain they endured by the hands of their horrible mother.

“You can’t believe the dysfunction of the family,” Jay said. He changed his name to distance himself from his mother. “They’ll never know what we went through, but it helped us [to write this]. We wanted to finally get the last word.”

When Kathleen moved to California, she never sent word to her abandoned children.

Jay said, “We didn’t have so much as a card from her. I remember she came home twice and on one occasion she was showing pictures of her and her kids playing cards, drinking beers. Gina and I were standing in the room, just standing there, and she didn’t even acknowledge us. It’s like we didn’t exist … How can you do that to your own children?”

Kathleen Dehmlow’s obituary is not the only scathing one published. One man, Leslie Ray Chirping, who lived a mean life in Galveston, Texas, was said to have lived “29 years longer than expected, and much longer than he deserved.” It also said that his cause of death was “due to being the horse’s ass he was known for.”

What do you think about it? Should the children have kept their opinions to themselves?