A Baby Deer Was Stuck In The Pool Until The Police Showed Up And Got Him Out : AWM 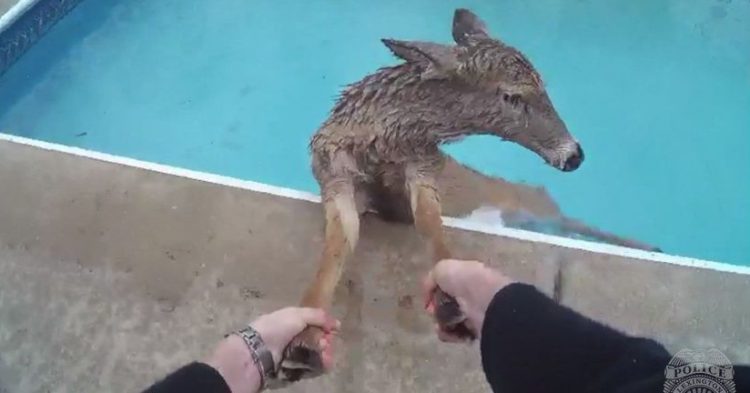 When the Lexington Police Department received a call from dispatch that they had to conduct a pool rescue, they rushed to the scene, thinking that someone’s “baby dear” had fallen into the water. But when they arrived on the property, the police were surprised to see that it was not someone’s dear baby who had fallen in and needed help getting out, it was a baby deer struggling to exit the pool.

Officer Flannery was the one responsible for helping the animal out of the water. He arrived at the property in the rural part of Fayette County and got to work relieving the trapped dear from the pressure of being stuck in the residential swimming pool. 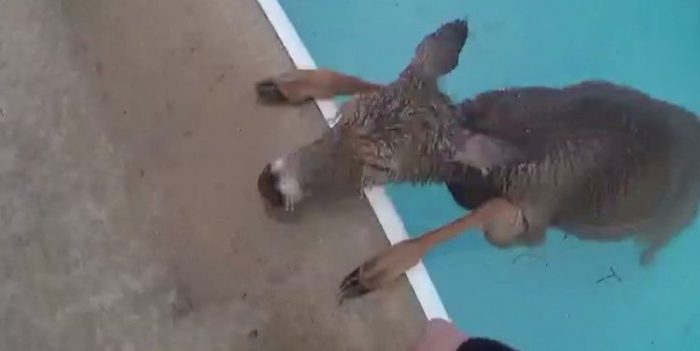 Unfortunately, temperatures were cold. They were about eighteen degrees, so the baby deer was in danger of dying from the cold. If the rescue effort was not swift, the little one might not make it out alive.

Officer Flannery soon found himself in good company. Dispatch had also called for help from the Animal Care & Control and the Fire Department. They arrived on the scene, and along with the help of the homeowner, Officer Flannery was able to lead the rescue effort.

After a little bit of effort, Flannery and the team got the deer out of the water. As soon as it was on sure footing, the deer bolted for the safety of the nearby woods. It was very thankful to be out of the deep end and onto solid ground again.

Footage of the video was uploaded to the Lexington Police Department page online. The force decided to add a soundtrack to the baby deer’s escape, so they included the touching sounds of “My Heart Will Go On” by Celine Deon.

The police department uploaded the video on January 22. They wrote the following to caption the content:

“You never know what a day on patrol will bring! On Monday morning, Officer Flannery responded to a home in a rural part of Fayette County, where a deer had become trapped in a swimming pool. The temperature was around eighteen degrees. Animal Care and Control and the Fire Department were also dispatched, but Officer Flannery was first to arrive. With help from the homeowner, the deer was safely lifted out of the pool and appeared to be okay.”

As you can imagine, this footage tugged at the hearts of viewers across the country. Many wrote comments like the following:

“I felt kind of emotional. Then the music begins.”

The police department responded with, “You can’t hear it in the video, but we’re pretty sure Officer Flannery whispered to the deer, ‘I’ll never let you go.’”

Another concerned citizen said, “That pool should have had a cover on it, and the deer wouldn’t have fallen in.”

A second person agreed, writing, “Homeowners, now put either a fence or a cover over the pool. You’re lucky it wasn’t a child. Thanks to the officers for getting the deer out!”

What do you think about the inspiring rescue effort?